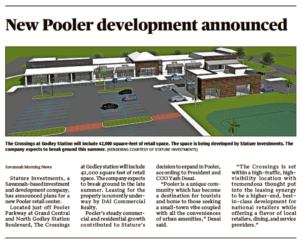 Located just off Pooler Parkway at Grand Central and North Godley Station Boulevard, The Crossings at Godley Station will include 42,000 square feet of retail space. The company expects to break ground in the late summer. Leasing for the property is currently underway by DAI Commercial Realty.

Pooler’s steady commercial and residential growth contributed to Stature’s decision to expand in Pooler, according to President and COO Yash Desai. 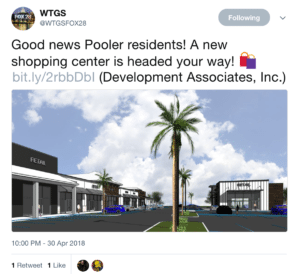 “Pooler is a unique community which has become a destination for tourists and home to those seeking a small-town vibe coupled with all the conveniences of urban amenities,” Desai said.

“The Crossings is set within a high-traffic, high-visibility location with tremendous thought put into the leasing synergy to be a higher-end, best-in-class development for national retailers while offering a flavor of local retailers, dining, and service providers.”